Often times you don’t know that God’s about to do something to you until after it’s happened. 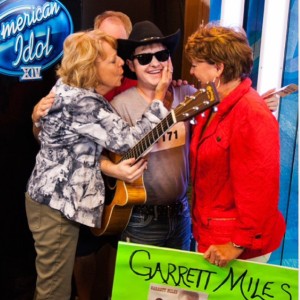 I meet with this great group of guys every Friday morning over breakfast. We discuss how we’re trying to live a life centered around God by our actions and what we study. One of the highlights of the discussion usually focuses on our ‘closest moment to God.’

Typically, a ‘closest moment’ involves a charitable act, the experience during a worship service, or an encounter with someone special where faith or love was discussed. My closest moment was different; it involved American Idol, social media and a giant extended family.

We had already seen the video of Garrett’s audition, and knew that the outcome was favorable, but to actually watch it on the show was phenomenal! Garrett did a fantastic job of just being himself. He’s a supremely talented young man with a country voice that is pure and a guitar talent that is graceful. Oh, yea, he is also blind; but that’s not what this blog entry is about.

My closest moment to God came in the minutes and hours after Garrett’s audition aired. It was incredible to see all parts of my extended family focus on one individual, one event and one purpose. Social media exploded with all of us cousins, brothers and sisters, mostly from different cities and states, coming together to drive awareness about a man that is not afraid to say that his blindness is not a barrier, or that his talent is God given.

In a past blog posts from 2014 I wrote about one of my other cousins on the other side of my family that is deaf…I discussed the common languages of love and laughter, but I was reminded last night that I should have also included song and music as common languages.

So, a blind 25-year-old man, through music and song, made three entertainment superstars and the rest of America, love, laugh and find a common language. I’d call that a hymn of praise!

After watching Garrett sing and then seeing him embraced by the love of his family after he received the ‘Golden Ticket,’ I am pretty sure that God has ways of bringing us all together for close moments; even on American Idol.

G. Allen Mercer is an author with a ‘heart on fire’ to write about God’s grace in a factual and fiction genre.

Book 2 News: Might to Save, the sequel to Underlying Grace will be released February 2015

One thought on “A Close Moment with God on American Idol?”